Dr. Thomas Smith admits he had his doubts when he was first asked to investigate Scrambler therapy, a device that uses low doses of electricity to block pain signals without the use of drugs.

“I am a very skeptical Midwesterner,” says Smith, MD, a researcher at the Sidney Kimmel Comprehensive Cancer Center at Johns Hopkins University School of Medicine. 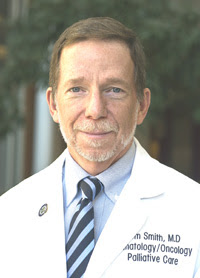 But after four years and several studies testing the Scrambler, Smith is now a believer.

“The evidence is pretty compelling, with most of the studies finding really a substantial reduction in pain with no toxicity,” Smith says.

“It’s simple, easy, relatively inexpensive, non-invasive, and easily testable on the individual patient. You put the electrodes on, move them around and you should be able to tell in three to five days whether it’s going to work at all or not for the patient.”

Smith’s latest study was published in the American Journal of Hospice & Palliative Medicine. Ten patients suffering from neuropathic pain after a bout with shingles achieved significant pain relief after 10 days of outpatient treatment.

Smith says the average pain score for the patients fell by 95 percent within one month. Relief continued over the next two to three months, long after Scrambler therapy ended.

Smith has had similar success treating patients with cancer induced peripheral neuropathy.  About 80 percent got substantial pain relief after using the Scrambler, which is similar to a spinal cord stimulator, but far less invasive. Spinal cord stimulators, which also use electricity to block pain, are surgically implanted next to the spine.

“It’s almost as if we’re getting the same ultimate end result as spinal cord stimulator, but without having to unroof the spinal cord, sew an electrode on and then have it permanently connect to an implantable pump that costs $50,000.”

A typical session on a Scrambler lasts 30 to 45 minutes, with the device sending low doses of electricity through electrodes placed on the skin of painful areas. The device “scrambles” or re-boots nerves left frayed and over-sensitized by chronic pain.

“You feed in artificial nerve impulses designed to confuse the nerves, scramble the pain information that they’re sending, and allow them to re-set,” says Smith.

Although the studies are promising, they’ve been small and haven’t made much of splash in the medical community. Originally developed by Giuseppe Marineo, an Italian scientist, about three dozen Scrambler devices are now in use at pain clinics in the United States, mostly on the east coast.

They are licensed to Competitive Technologies, Inc. (OTC: CTTC) a small technology company in Fairfield, Connecticut that distributes and leases the Scrambler under the name Calmare pain therapy. In Italian, the word “calmare” means “to ease” or “to soothe”.

“If this were a very rich company, it would invest $3 million and do a 60 patient sham controlled trial in a heartbeat. But the company doesn’t have that money,” says Smith.

Perhaps the biggest barrier to making the Calmare Scrambler more widely used is that the therapy is not usually covered by Medicare or private insurance companies. As a result, many patients pay in cash, usually about $150 to $200 per treatment. That can add up to thousands of dollars after a standard course of ten treatments.

“We are not what is called a ‘standard of care’ yet. And believe me, if we were, the number of people that could be treated with this would escalate dramatically,” said Johnnie Johnson, Competitive Technologies’ chief financial officer.

“When we go out to sell this device, my guess is out of ten calls that we make, we probably get two sales. If we got insurance reimbursement regularly for this, we’d probably get six.”

Johnson says Calmare therapy is more cost effective than prescription painkillers or other types of pain treatment that are reimbursed by insurance companies.

“A narcotic type drug or a very expensive drug could cost $400 to $1,200 a month. If you took half that money and applied it to Calmare, the payout on that is pretty quick,” says Johnson.

But Calmare therapy doesn’t work for everyone. Beth Stillitano, a North Carolina woman who suffers from a chronic pain condition called Reflex Sympathetic Dystrophy (RSD), had a very mixed experience with Calmare therapy. The first few treatments went well, leaving her pain free for the first time in 16 years. 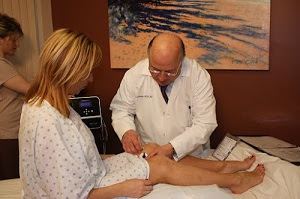 “Within 15-20 minutes of starting the therapy, my RSD pain seemed to diminish,” Stillitano  wrote in her blog. “After treatment I went an hour and forty-five minutes with no RSD pain!!!!! It is so incredible to walk and not feel pain with every step.”

But a second course of therapy, held months later, did not go well. Stillitano stopped the treatment after just two sessions.

“I was in a lot of pain, and I could not even drive. My sister said watching me have an hour session of Calmare therapy was torture for her. That night, I went into complete flare-up,” Stillitano told National Pain Report.

Dr. Smith says more studies are needed to fully understand how the Calmare Scrambler works – and why it doesn’t for some patients.

“There are probably 20 percent of people who don’t respond to anything, but it seems like the other 80 percent get at least minimal, if not substantial relief. We’ve had people where you can actually see the redness and pain and inflammation diminish over a couple of days as the pain gets re-set,” Smith says.

“It could be that some of this is placebo. And I’m more than willing to accept that,” he adds.

Although it’s been used primarily to treat neuropathy, Calmare has been used with some success to treat other chronic pain conditions such as fibromyalgia, phantom limb pain, back pain, and Chronic Regional Pain Syndrome (also known as RSD).

This fall, Smith starts work on yet another study – this one on breast cancer patents – which is being funded by the Avon Foundation. The study will test the Scrambler’s effectiveness in relieving neuropathic pain cause by chemotherapy.